skip to main | skip to sidebar

Before I arrived in New Zealand, my fellow travellers advised me not to expect too much civilisation, but instead to revel in the spectacular scenery. Arrival in Christchurch served to prove them right.

Christchurch, the largest of all the “cities” on the south island, was surprisingly small. With a population of just 600,000 – it was about the size of my home town in the UK. It had one high-street, a small square, and was almost totally closed down as I investigated it at 5 minutes past 5 on a dreary and cold Saturday afternoon.

The thing that Christchurch did have going for it though, was its charm. Everyone was smiling, people were waving at each other and even the tourists weren't hated as much as they are everywhere else in the world. New Zealanders aren't really internationally famed, but from my first impressions, I would put them up there as the “friendliest nation on earth”. 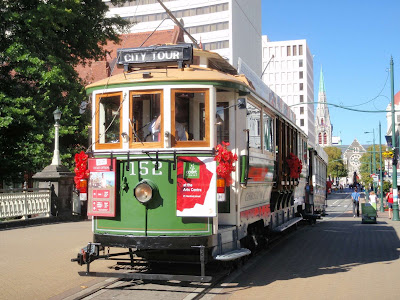 Shops were a time-warp of old English tradition, spliced with the Australian enthusiasm for the outdoor world. Although new goods, they were always serving them in an old fashioned way. For example, I went into an espresso bar, with Italian coffee maker at the centre and Kiwi greeting me with a wide smile, only to be asked if I wanted sugar with my latte – for it would be mixed in for me. On enquiring about where I could purchase some wool tops, instead of directing me approximately, I got directions based on people's names. “The fourth shop down is very good, as Ted sources the wool from the Walton's farm.”

To top it all off, I then went into a local bakery to try and pick up something to eat with my coffee, only to be told they were closing. However, instead of just leaving, they offered me a free scone!? If I hadn't had been so hungry, I would have taken a picture. Like all good fisherman's tales, I shall now say that it was huge. The best scone ever? Probably not, but good all the same!

Christchurch is tiny, but I don't care; it has the small town charm often lost by bigger cities. I hoped this would just get better as I move away from the “big smoke”.

Answering some adverts at the local backpacker hostel, I managed to locate a suitable travelling partner, with whom I would spend the next three weeks cruising around New Zealand in a camper. One, “speed questioning” interview later, and we had deemed each-other as suitable travel partners. Some hurried phone-calls to local renting agents ensued, and finally we had our own camper-van to travel the New Zealand islands with.

After five months on the road I finally had a home. “Lucy”. 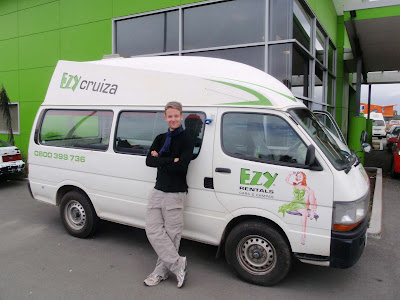 She was a beaten up old pile of crap. But like a particularly ugly and lame puppy, we would love her anyway. Tough and high-revving love that is.

Now it was time to head south from Christchurch, taking in all of the spectacular scenery the South Island has to offer.

Our first night in the camper was on the shores of a lake, about 4 hours drive from Christchurch. Here, after stocking up with supplies from a local supermarket on the way out of Christchurch, we cooked our first meal, deep in the bowls of “Lucy – Protector from the evil sand-flies” as she shall now be known. 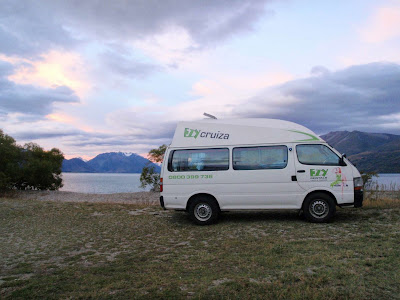 I'm going to admit this now, I was a little worried about the standards of cooking we would have to endure on this journey. I've seen what some people my age call food, and I must admit that the idea of eating that for three weeks was less than appealing. Consequently, I was very relieved when it turns out that my travel partner was actually a very good cook. Despite the limited resources in our cupboard, he always knew the best combinations and threw them together very well. He also didn't make it impossible to wash up the pan by encrusting the best bits of food onto the bottom – a definite benefit! 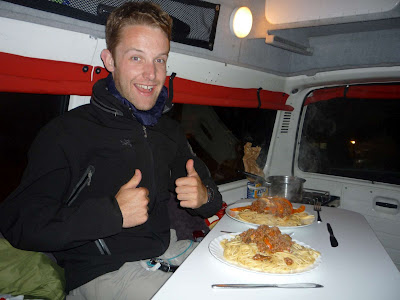 The next day we awoke and began to pack up the van. Starting at 8:15, with a 10:00 curfew, we thought we had loads of time. At 11:00 we decided to leave with it only partly completed; it was something we would need to improve in future attempts...

With a rather late start under our belts, it was time to head off to our first destination – the highest salmon farm in the world.

When I heard that, I had envisaged huge heights – perhaps 3000m higher than sea level, with snow cresting the sides of the farm. I had certainly hoped for more than the 800m height that we observed. Saying this, the scenery once again made up for it as we ate our freshly smoked salmon and blue cheese overlooking the vista. With a quick walk across the farm for DIY feeding time (don't you like those business models where tourists pay to do someone else's job?) it was great to feel like fish-god! 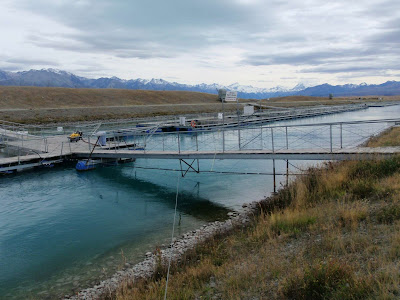 Following lunch, we headed off for Mt Cook – the highest point in NZ.

Unable to scale Mt Cook ourselves, as it requires mountaineering experience and much gear to get past the numerous glaciers, we had to be content with the view from the bottom. 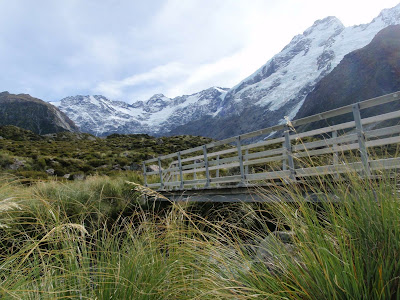 Dropping the van off at the bottom of a valley split, we made the quick 90 minute walk to the front of the glacier, which was to mark our return point. Having never seen a glacier before I was struck by how cold it wasn't. Now, I know glaciers are made from ice, and ice is usually below freezing point, so, you can imagine my confusion when we reached the glacier and I was hot, whilst only wearing a very thin top. It must have been about 14 degrees – certainly no where near the 2-3 degrees I was expecting!?

Feeling a bit cheated, Alex decided to go in for a dip and claim first dibs on a large chunk of ice – just to check that it was actually cold and not some Star Trek polystyrene prop. The screams he made and the moaning after the event confirmed various reports I had heard that glacial melt-water is in fact very cold. Let's just say that no one wanted to go swimming in that lake. 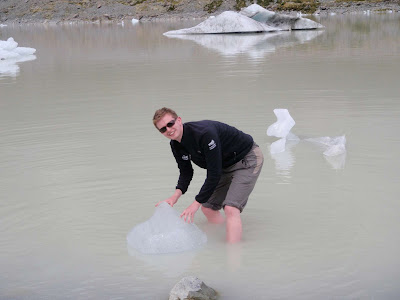 Pressing on to our next port of call, we decided to camp by the side of the road and welcome in the evening (and the ever present sand-flies) by the shore of another lake. Although this wasn't strictly legal, no-one seemed to care, and it did mean we didn't have a working towel rail or microwave – two things I'm hardly going to cry over. Although it did also mean we were lacking in power to charge our MP3 player/ speaker combination (as the van's radio didn't work), and any electronic devices such as cameras or laptops.

What we were also lacking though, certainly made up for the rest... As we laid back in our beds, blinds open to the world gazing at the foreign southern sky constellations, we couldn't hear anyone getting drunk and partying, no children screaming, no generators humming. Silence. This is almost like camping. Almost. 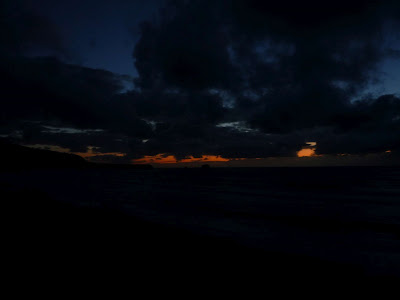 The next day was to bring with it the iconic New Zealand moment. No, it wasn't the shamefully childish Maori art, nor some sandstone cliffs. It was being stopped in the middle of the road by a few million sheep. Welcome to New Zealand. 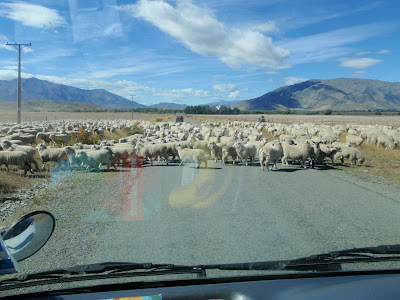 This was then topped off by some oversized Malteasers, which apparently draw tourists from miles around – even though there's only about ten left, and those which are left aren't even that round. 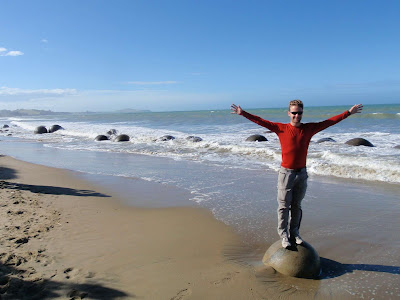 Oh, and the best name for a boat I've ever seen. 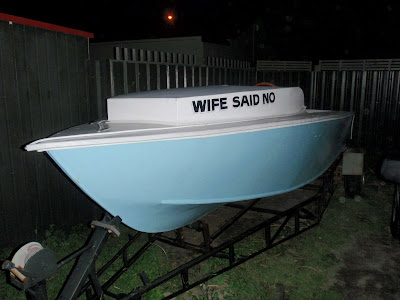 By now, we were towards the southern tip of the South Island – a place called Duneaden to be precise. Duneaden's claim to fame in the world is that it has the world's steepest road. I don't really know why, but we were rather amused by this concept and so decided to take a stroll up it. When I say take a stroll, this soon degraded into a slow-motion race up the hill. For those who haven't tried, don't. It makes you feel really pitiful, as you run at about 5 mph up the slope, no matter how hard you try! What was amusing though, was thinking of the poor residents who must suffer the daily trudge of tourists and cars who drive up the dead-end street, only to then drive back down again a few moments later. 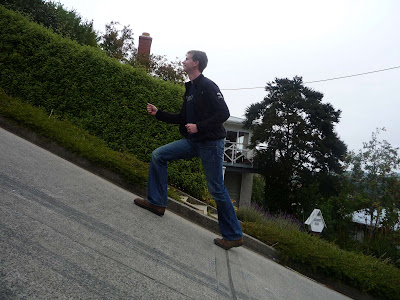 So far it had all been well and good, a few minor sights here and there, and some other things to see and do along the way, but nothing really earth-shattering. What makes people fall in love in New Zealand? Well, I think I was about to find out...
Posted by Hadyn at 23:47

Didn't realise you were so relieved by the cooking outcome! And I thought you were a bloody good cook too. (Mutual pat on back)

It all looks very very fun. If NZ is the friendliest, who is the unfriendliest? When are you back? I'm looking forward to the pig event.